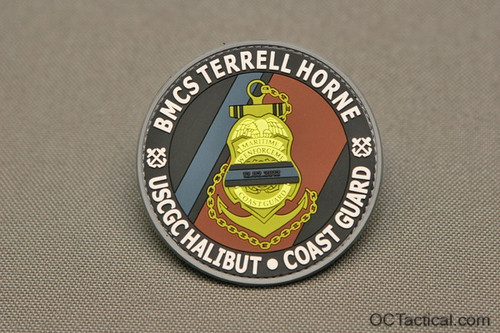 On Dec. 2, 2012, Senior Chief Horne, the Executive Petty Officer of the Coast Guard Cutter Halibut was killed while conducting maritime law enforcement operations off the coast of California.  He sustained fatal injuries when the small boat he was on was rammed by a vessel being operated by drug smugglers. One of Horne’s final actions was to pull a fellow crewmember out of the way before the smuggling vessel collided with the Coast Guard small boat. Senior Chief Horne is survived by his wife Rachel, and two sons, Kade and Miller.

All the proceeds from the sale of these patches will be donated to The Coast Guard Foundation.  The CG foundation supports the families of fallen Coast Guardsman in times of crisis.

OC Tactical is a small company and isn’t in a position to do much, but from time to time we can do something.   With this run of 500 patches we should be able to generate about $2000 to donate to the Coast Guard Foundation.  Special thanks to Marsec4 who provided the graphics and Combat-Swag who not only fast tracked these patches during the busiest time of the year, but also without being asked provided a substantial discount on the price.  Without their help it would have never happened.